Script for the opening of

This text was performed by Ina Hagen and Daisuke Kosugi for the opening of the exhibition on Jan. 19, 2017.

An interview with FRANK and Louise Dany about the exhibition can be read here.

Open Casket by Dana Schutz (aka Jet Magazine, aka Friday Moten Recording, aka A Brief Anthology of Quotations, aka Michael Brown)

Open Casket by Dana Schutz (aka Michael Brown, aka Jet Magazine, aka Zong! Recording, aka 12 Years a Slave Edit aka A Brief Anthology of Quotations)

Case study: Working out from ambience (visiting the exhibition Pixel-Collage by Thomas Hirschhorn at Fotogalleriet, Oslo)

OBLIQUE STUDY (aka Untitled, Untitled; aka Manager, Accompany; aka If I Told Him, A Completed Portrait of Picasso; aka Ghost of a Trance)

This text was delivered as an introduction to open and experimental symposium modeled after Plato’s Symposium on love entitled Prefigurative Institutions at Louise Dany (Oslo) on February 10, 2017.

SUMMONS TO THE WITCH: HYPERSTITION IN THE AGE OF INCREDULITY – ADWAIT SINGH – TAKE ON ART, INDIA VOLUME 3, ISSUE 2, 2017.

TO DO OR NOT TO BE – LISA ANDRINE BERNHOFT-SJØDIN – OBJEKTIV

Louise Dany runs a local, digital library of PDF's that can be accessed from a personal device when visiting our location in Oslo.

* The library was set up as part of the "HOHOL Sleepover" with Clara Lobregat Balaguer in November, 2016.

**The library was used by Slow Reading Club as material and conceptual starting point for the reader "Whose organs were those of a leopard"  compiled for the performance held at Louise Dany on May 3, 2018. 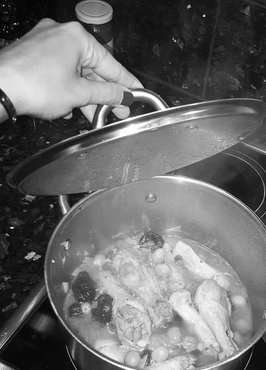 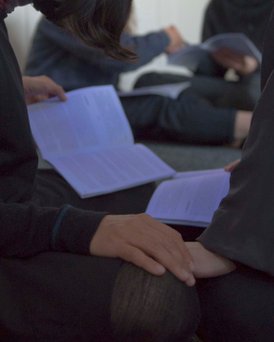 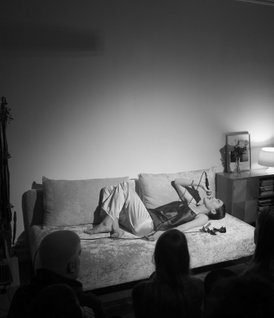 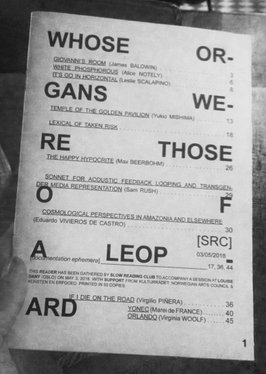 Louise Dany goes by they and is an artist run initiative in a mirror-windowed store front and apartment in Oslo, started in 2016 by Daisuke Kosugi and Ina Hagen. They alternates between a hosting venue for other establishments, a semi-public exhibition space and salon for art related events. Daily they is a private living and working space.

THE OFFICE FOR CULTURE AND DESIGN (OCD)

Louise Dany cares for their guests. They would rather pour a glass too many and is not shy of entertaining. They like for people to stay over, to be closer to them and become more like them. Discretion and privacy is law, nones pleasure is exposed. Louise D is always pleased to see you.

They sees many resemblances between their own physical form and Katarina Bonnevier’s reading of Eileen Grey’s Villa E1027 in Behind straight curtains - towards a queer feminist theory of architecture, in fact they took their name from Grey’s housekeeper of many years. Flipping through the pages, they felt a spiritual connection with the maid in her private quarters. Seeing as Grey was a progressive and successful designer cum architect for the early 1900s, Louise D took particular notice to how she was living — while the rooms above showed daring vision and fluidity, a real break with conventional heteronormative living, the maids quarters were humble to the point of ridiculousness. Louise D cared deeply for Grey and when no guests were around the two of them were inseparable and shared the house equally. But this was perhaps never intended in Grey’s vision. Louise D’s form is at both times their potential and their limits.

There might be something about the present that called for their rebirth into this world, a new crisis of the planets. Louise D feels as if they has lived this time before, perhaps more than once. They knows the world is unfair and recognises the double standards we are bound to operate on. Despite this they keep looking for openings, these tiny slits of hope, joy and freedom where the double standards of ones neighbour become ones own until there is an inflation of standards. All standards are nothing more than one standard turned away from itself, a gesture Louise D only resorts to when dealing with discriminatory assholes.